So I have mentioned in a post a few weeks back that Curly Headed Boy wasn’t very happy in reception (first year of school).  Last week I explained how I had tackled one of the problems, which is that he often feels overly criticised by the children in his class.  So, I thought I would give you an update on how he is doing.

He certainly seems to have gained some confidence, especially because he now understands that his lovely teacher has put him on the table with clever kids on purpose, and not because they had made a mistake.  So he is ‘meant’ to be there.  How funny that I would never have thought to tell him that he was ‘good enough’ to be in the class room.  I suppose that is because I never explained what those ‘play dates’ with schools were, when he was being assessed.

I’m not sure that he is managing to stand his ground with one of the stronger characters who is intimidating him a bit, but he has a lot more perspective since I had that little chat about it.  So there is still some work to be done here.  Plus maybe another chat with the school, who have done an assembly on ‘bullying’, but I think that they might need to do some more general things about ‘friendship’ and ’empathy’ within the class.  However, today is Pirate day (see photo here), so he has been a happy bunny this week.  Plus in a couple of weeks they have an outing to an air museum, which is going to be fabulous.

Despite him being tired and it being dark, I have made a big effort to make sure that he gets a playdate in every week.  I’m purposely being quite strategic in the plan of dates.  First have been some old friends from his nursery, who are not in his class, but I thought that to give those friendships a little boost would help as a good foundation.  After all, they can still play in the playground.  In the next couple of weeks, we are focussing on new friends, and repeat play dates with new friends.  I’ve also got one with a favourite girl friend of his coming up, as he does like girls and I think that a little encouragement to ignore the girl/boy divide is a good plan.  So I have become a brilliant Mummy PA in the last couple of weeks!

When looking to arrange playdates, it’s not ‘wrong’ to think about it strategically.  School relationships are amazingly fluid, so especially at this early stage they can easily change.  I remember back at my school, there was a girl who I generally thought was pretty horrid and was always picking on me.  However, one day my best friend and hers got us together and explained that they wanted to be best friends from now on, and they didn’t want us to be alone, so could we become best friends (you know what girls are like with their BF relationships, it’s a big deal!).  Do you know what, we did, and it lasted for ages.  Our relationship never went back to the original one where she was picking on me.  So it might be worth you really thinking out of the box for the play dates and not going for the obvious options.

If you are working, or don’t get to do the drop off like I do, there are other ways of finding out.  You can ask to have a chat with the teacher; I did that at his last nursery and they can be a great source of suggestions.  Plus, I just put an invite in a child’s bag for the play date if their parents weren’t there at drop-off and pick-up.  If you don’t want to do play dates during the week, then hows about one at the weekends, or make a big effort to go to the parties you get invited to and suss out potential parents you might get on well with as well for a get-together at a weekend.  There are always the holidays too, so you can pack in lots of play dates then.

I was arranging them on Mondays or Thursdays, as they seemed like the best days (Tues & Wed are now full: more of that to come later), and I thought he might be too knackered and horrid on a Friday.  But I’ve changed my mind now, and any new ones, I’m going to book on the Friday.  I’m also going to try to book some with more than one child at our local soft-play/animal farm, because that makes it easier for us Mums with siblings to deal with, and we can have dinner there too, so it reduces the stress of getting everything fitted in.

I know how difficult it can be with a busy life, dark winter nights, and siblings.  But if your child is having any problems socially at school, I really encourage you to help them a little and prioritise it.  I have had to drop/adapt a few things sometimes in order to do it, like baths (every other night), 2 books to read (dropped to 1 some nights), meals that take 20mins to cook (dropped to 5 mins).  But I can make up for a lot of that at the weekend.  It’s a fine balance, but it’s worth having a go.

There will be another blog next week on how one of my other ideas of adding stuff outside of school is going.  (ooh and if this is your first time here, remember to check out all my other posts about dealing with bullying) 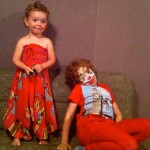