Normally my little tips about general health are all that’s been needed to boost my energy levels, but there are times in my life when more is needed, and the last few weeks is one of them.  The great news for you is that as I resolve my own energy levels, I’ve been able to give you much more structured ideas for tackling yours!  So I’ve been talking about embracing the exhaustion to find the causes, making a plan and then four tips for planning ahead in my last few blog posts.

This week’s hint comes from the fact that I’ve been finding the general daily repetition that us Mums need to do driving me mad!  Plus I’m of the opinion that sometimes you need to behave in the ‘real world’ in a way that will get mirrored in the ’emotional world’; so if my brain is a bit noisy and over full, then my theory is that by decluttering my surroundings, I’ll start to get space in my head as well.  Plus, by rethinking the organisation or flow of the problem areas, I get to save myself energy in the future.

I can just about deal with the daily to do’s that repeat over and over and over and over again, like a hamster on a running wheel.  Plus one of the big reasons (apart from enjoying it!) I work is because I’m not very domesticated, so by working I can pay for a cleaner, and dog walker (2 children and 2 badly behaved dogs is not fun!).   The big hairy northern one is generally helpful with stuff, but also away a lot and then riddled with jetlag, but I do have a little irish granny that helps me with childcare, and while she plays with Little Dimples, she does pootle around tidying a bit as well.

However, what had pushed me over the edge was a 5yo, a toddler, a dog and a husband who ALL like to pick things up and then put them down somewhere else.  Often 3 floors up (we live in a town house).  WHY?  Why pick stuff up for the hell of it and then put it down somewhere else?  Then add the helpful people who do the same, like my little irish granny (I’ve just found 3 bags of mouldy lettuce, I wondered where they had gone!) and cleaners who think they know best about where stuff goes.  Clearly the world was planning on driving me totally crazy, because being a touch retentive I kept seeing things ‘in the wrong place’ and getting more and more stressed by it, but not having the energy to tidy/organise/move anything as well.

Plus, Little dimples has taken a real affection for the craft drawers, and despite the fact that I had tidied them so that they were organised, the coordinated efforts of Curly Headed Boy and the Irish granny meant that there were all sorts of things were no longer organised and hence available for her.  So every day the bloody lolly sticks would end up all over the floor, plus a pile of tissue paper.  Curly Headed boy would get out the pens, but because of the chaos not be able to put them back and there were pens, pensils, crayons, rubbers and goodness knows what else all over the place.  Little Dimples would then help out with generally distributing them around the house.  Oh and the dog always likes to help by picking stuff up when he is excited.

How can so many people walk over stuff on the floor I wondered and NOT pick it up?!

Then due to the general chaos of stuff being everywhere, but not where it was meant to be, nothing could be found.  So at times when there were jobs to do, or something important to be done, I would be constantly hounded by a 5yo or a baby girl who didn’t know what to do with themselves.  I remember a blog post during the last half-term that should have taken 15 minutes, taking 1.5 HOURS!!!

Eventually I thought to myself: despite my wish to lose a few more pounds in weight and the undoubted good exercise that picking things up is for me, enough is enough. It was time for a good declutter and detox of the downstairs (kitchen, utility and playroom), followed by a big reorganise.  So Sunday was PJ day, and the big hairy northern one was a brilliant child distractor.

I made space in the utility shelves, and the tissue paper and cardboard is now in a hessian bag.  I like Curly headed boy to have access to the craft stuff, but enough is enough!  All the pens/pencils/crayons/other things are in boxes or pencil cases; no longer do I have one of those draw tidy’s so that they are out on display.  Space has been made in the play room by removing baby toys, so it’s easier for Little Dimples to find her stuff, and by moving toys for her out of the kitchen, I’ve made a pile of shelves free specifically for the big hairy one and the kids so that it is easy to find interesting books, colouring books, sticker books, doing books, or basically ‘things to do with your own initiative when Mummy is busy stuff’.  We moved the furniture around as well so that these shelves are really easy to access, in an effort to make sure that there are as few blocks to people/kids finding things to do!

So if you are getting suffocated by all the stuff around you, and having to repeat endless tasks that could be gotten rid of, and are finding that your house isn’t organised in a way that works for the family, have a think about setting around a few hours for a rethink.  The problem with kids is that as they grow their needs change, so I can’t promise you that once it’s done, it’s done.  But I can promise that it will help to give you more energy, space to think, and waste less energy in the future.  I wrote a couple of blog posts in the past that will help you:

Did it work?  Yes, so far, so good.  I’ve had to put a couple of pencil cases away each day, but that’s easy.  Little Dimples has helped herself to books on the bookshelf, and Curly Headed Boy is really chuffed with the change.  Plus it did seem to give me the space to get a much quieter head, so I can definitely recommend it.  Have fun!

If you enjoyed this post let your friends know about it and sign up for the RSS feed so that you get reminded each time there is a post, or  join my facebook page.  Also, if you are lacking in energy, then signing up for my email newsletter will give you a free Life Health Questionnaire. 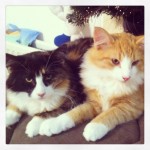