David Tennant broke my heart when he left Dr Who.  But just before Christmas I forgave him, even though he’s getting married to someone else ;o)

Big hairy northern hubby’s company does a big charity event every year, where all the profit they make on the day goes to charity.  This is no cynical PR trick.  They actually save up deals and attempt to make as much as they possibly can.  Celeb charity ambassadors turn up to do the deals and in return their charities get the dosh.  This year they made about £13million.  Not too shabby.  (The only shabby thing was their competitors trying to take a pile of clients out for lunch, however they must have been tipped off and just incase they had saved up a pile of deals to put through; shame on you companies, you know who you are).

A few of the celebs are a bit dull, and not very interesting, they turn up, do a deal and then piss off.  But others really get involved in the event.  Big favourites in the past have been Jamie Oliver playing a Wii cookery game, and Gail Porter who the brokers adore, I think partially because of her bald head and how strong/gorgeous she is with it.  All the staff dress up, and it’s an especially nice treat for the back room people, i.e. the people who don’t earn the salaries of those on the desk.  (Before you send hate mail, no it is not a bank, it is an ‘inter-brokers’, and be very very sure of your facts before you criticise either with me because I might know a little more than the general media stuff).

Big hairy northern hubby can be seen here dressed as Robin (OMG) with Prince Charles and Prince William, which was a HUGE deal as they have never both gone to a non-royal event before.

Others this year where Kirsty Allsop, who was a major favourite with the dealers.  You might have thought that what they would like is mainly blonde, busty and scantily clad; but whilst that is definitely appreciated, they really love a woman who can stand up for herself and give as good as she gets.  The girls were really chuffed to see Daniel Craig, and there were tonnes of sportsmen for the guys.  Lots of the celebs are probably totally lost on the northern hairy one, as he doesn’t have a clue who they are so I have regularly suggested that we swap places.  But there was one person this year that I was particularly gutted not to meet, and that was David Tennant.

I think David Tennant was the best Dr Who ever.  He was quirky, plus drop dead sexy.  How he managed to do that and not fall into the trap of being ridiculous as some have, I don’t know.  But I think he is fab.

So there I was, at home, knackered after several weeks of Little Dimples sleeping badly due to teething and Curly Headed Boy having at least one nightmare per night (more about that another time), and this popped up (sorry, this is the first time I’ve aded a video and you need to click a couple of times);

Ah be still my heart!  David Tennant is now forgiven, and the best celebrity in the whole wide world!  (Please do not listen to this with your kids in the room!).

15 thoughts on “How David Tennant Made My Day” 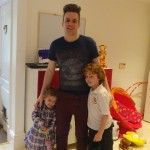