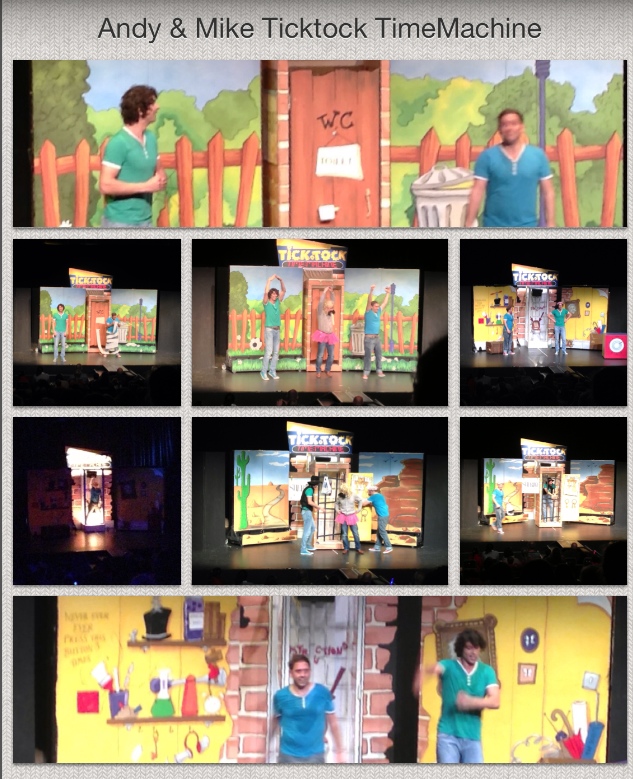 A couple of years ago I went to see Andy Day (The tall skinny one with curly hair from cbeebies) and his mate Mike James in ‘The big box of bananas’, which Curly Headed Boy loved.

So when we were invited to review their new show ‘The Tick Tock Time Machine’ I jumped at the chance.

The question was, could they live up to their past success?

Well basically Andy and Mike come across to me as two young blokes, who’ve known each other a long time, and get paid to lark around on the stage and behave like young guys do.

Which is of course a raging success with the kids, because the silliness of the sense of humour is just perfect for them.

For me it is lovely to go to something so simple, so silly, and so engaging.

In the meantime they will be going back and forwards to the future and have a clever way of making sure that one of them is available to play other parts when needed.

There will be a couple of tongue in cheek mentions of the toys they are using being up for sale (about £2-£5); but I don’t mind that as the tickets are really cheap and Curly Headed Boy still plays with his banana from last time.

There is a 20min interval, so don’t worry about toddlers needing a Pee, and they stayed around afterwards to sign things and raise money for their favourite charities.

Sadly I couldn’t stay to meet the guys as Little Dimples 2.5yrs (who has slept through the loudest film at a cinema), was absolutely entranced and desperately needed to get home for a nap.  Her verdict on the show?  Well from the constant ‘I want to go back to the show’ for the next 2 days, I would say it was a success!

Curly Headed Boys favourite bit was the rock, paper scissors game; but I can’t tell you why because that would give the joke away …. Roar!  Oh and the silly dance with the bottom bit in it …. see what I mean about the sense of humour!

If you are thinking of going to a film or pantomine or show and don’t know what to do in this rather tight for money day and age, then I would thoroughly recommend anything by Andy and Mike.  You aren’t going to scare young ones, you’ll get all the audience participation of a panto, and a lot more fun than a film.  Just remember to pop to the supermarket and buy some sweets and cool drinks beforehand.

I copied this from their website to help you see if they are coming to somewhere near you:

This show was at the Radlett Centre, which if you live anywhere near there or St Albans I can really recommend checking out their schedule.  They have lots of shows, and a Panto every year (without celebs) and are perfect for kids, because it’s a small theatre and there is a car park nearby.

I hope that Andy and Mike have had a really successful tour and come back soon with another show!  My only complaint or disappointment is how long we’ll have to wait to see them again, and that we don’t get to see Mike on TV, as the kids were just as fond of him by the end of the show.  They make a BRILLIANT pair together!

Disclosure: We were given tickets for the show, but that has not affected my opinion at all.  Updates: They’ve given me nothing to plug their FB pages, I just like them!