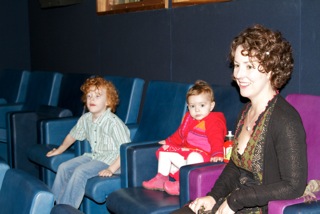 How I love my blog sometimes!  We are on a very strict budget of course with the big hairy northern one being made redundant.  We are OK, but it’s not a ‘good’ place out there in the job market and we are making sure that the redundancy package really stretches far.  So when I was offered to take them all into London (our expenses were paid) to see Jonny English Reborn just in time for the launch of the DVD (Feb 13th), I was really chuffed.  Little Dimples has never been to the cinema (she’s nearly 2), and I wouldn’t have risked taking her and waste the money.

So we duly watched the first Jonny English with them both (Little Dimples will watch anything her brother watches, purely because he thinks it’s good), and laughed lots, but did cringe at the use of the word ‘arse’.  Luckily my son totally missed it.  What I did worry about was the CONSTANT stream of questions from him.  It is very fast moving and often he got confused and then would be asking what was happening, just as it was explained on the film, which he then obviously missed; so it just kept happening over and OVER and OVER AGAIN!

Off we trotted on the train and tube (which of course kids think is great) to London.  It was a perfect little cinema for Little Dimple’s first time; which she proved by falling asleep throughout the whole thing despite all the noise.

I thought the film was much better than the first, but time has moved on, so I suppose it had to be more with the times.  I’m not a fan of slapstick; you know how I’ve realised I hate misunderstandings.  But this only had three situations that I couldn’t bare to watch, which isn’t too bad at all.  Plus the language was much better, with just one use of the word ‘turd’.  I find it fascinating that Jonny English can turn from really very sexy to cringeworthy in a matter of seconds.

With a very satisfied family we popped to Regents park afterwards as I’d never been there.  It seemed like a good idea to get some fresh air, but possibly we misjudged the level of tiredness, as removing Little Dimples from the freezing park was very unpleasant (think screaming kicking tantrum all the way to the tube).  She cheered up on the train home and made a friend; as you do at two years old, purely because you are both the same age.  All was calm by the time we got home and as you can see they are loving their new T shirts.

The final verdict: Curly Headed Boy LOVED it, and seemed to follow it much more easily, and is now a huge fan of Jonny.  I reckon that with a bag of popcorn it’s a good plan for this half-term, and a film that your kids will want to watch over and over.  It was also a big change for us to watch something with ‘real’ people in it for once, rather than a cartoon based film.  Ironically, having been sent to see the film for free, we are now going to have to buy it because my kids love watching their favourite films over and over.  Here’s the link to play.com if you fancy it too.