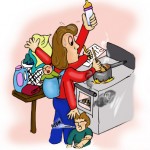 I help Mums (and me!) to enjoy being a Mum more and feel happier, healthier and wealthier.

I also help Small Business Owner mums to get their businesses booming, paying for the bills & fun adventures and fitting into their lives easily.

There is something from everyone from ..
* Blog
* Podcast
* Free facebook communities
* My Total Health series books
* Downloadable programs for small Biz owner mums
* Business Club
* 1to1's

I believe that we all deserve to be happy, healthy & wealthy!

Self Love Tips For Mums – Part 1

Us Mums are prone to comparisons, lack of confidence and not taking care of ourselves.…

Scare yourself a little as often as you can

Sanity Check – Do you Actually Want To Run A Business

It’s not that I want to put you off running a business. But I do…