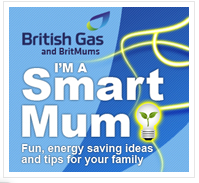 Energy Saving: the problem is how to go about it without appearing like a nag!  Plus my brain isn’t what it was, and although I remember that I was taught how to work out what having a light on would cost, I can’t for the life of me remember how to do it.  With the big hairy northern one home having been made redundant, I’m both wanting to save money and also encourage more light turning off now there are more people in the house!

2) Making Curly Headed Boy the ‘boss with the power’ and a clipboard so that he can mark down when people forget to turn off lights/plugs/standby thing’s – that’s going to create a monster!

So I was fascinated when British Gas contacted me about their Smart Meters.  I reckon this is the solution to my problem!  They replace your old Gas and Electricity meters and give you an in house display.  That is going to be so much fun, to see how much everything costs and how much energy it takes up.  (I have a strong amount of geek in my blood, so any gadget is going to get my blood pumping!).

You might remember last time I worked with British Gas that I admitted that I might not have the best Eco qualifications in the world.  However, it makes total sense to me to make the most of what we have by recycling and being careful about our energy usage.  Psychologically if we are thoughtful of our world and careful about how we spend money/energy it reaps benefits in us feeling like there is more value in our life and a greater connection to nature.  Otherwise we are like spoilt unhappy kids who are running around breaking their toys, getting bored quickly and constantly wanting more stuff.  Plus as a parent, energy bills seem to be one of the biggest concerns, so if this can help us easily reduce our bills (they are estimating by 10%), then that would be fab.

By the way, there is also a competition you can join in to win £250 worth of Sainsbury’s vouchers called the ‘Smart Mums Watt Loss Challenge’, which I’m totally joining in with; so you’d better not win it!

I’m really hoping that I’m on the list to get one of these really soon, I know that they’ve said that they plan to do loads in 2012, so cross fingers I’m one of them.  You can just imagine the geek in me doing happy jumps and the tree hugger smiling all contentedly!

Disclosure: I’m participating in the British Gas Smart Meter campaign. Smart meters work with an in-home display to show how much energy you’re using in pounds and pence. You can see how much you’re spending by leaving your phone charger plugged in all the time, or the heating on at night. And when you can really see how much you’re using, you can start to make small changes to become more efficient. Smart Meters automatically send British Gas readings so they represent the end of estimated bills! British Gas is committed to install 1.5 million smart meters by the end of 2012.