How fun Mudfest at Penn Festival was: I’m a ‘proper’ festival goer now! 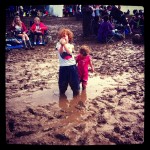 How fun Mudfest at Penn Festival was: I’m a ‘proper’ festival goer now!

I realise now that I’ve often looked on wistfully at images of Glastonbury wondering why I’d never been to a music festival and experienced the whole ‘vibe’ of camping, wellies and getting covered in mud.

Well I need wist no more!  I’m now officially a ‘proper’ music festival camper having just got back from Penn Festival 2012; a mudfest with a wonderful vibe and great music.

I have therefore proved to everyone that I’m totally capable of camping, as long as I can make it all look pretty with a bit of glamp style and that mud doesn’t phase me at all.

It all looked like it was going to go badly wrong when I got a text from the lovely Romany at Festivalkidz to tell me to not set off yet.  Problem was I was already half-way there!  The local cricket club weren’t willing to help out with their hard-standing parking (boo), and people were already getting stuck in the mud.  However they decided to go ahead, and I think it was the right decision.  They showed a load of determination and in return the vibe of those of us who made it and braved the difficulties in getting there had a great spirit.

I know it might sound a bit mean, but I think that considering the Isle of Wight festival a few weeks beforehand, there could have been a more concrete contingency plan in place.  That way it would have gone into action more easily.  For instance they would have known on the friday that only campers and artists/stalls were going to be let on and had the press about the buses/coaches picking up day ticketers sorted straight away.  There would have been more wood/straw/grasscrete to get those of us in and out, and more clarity on when the farmer was or was not going to be there.  However, realistically this was only their second year, so it’s just a little bit of inexperience and I really hope that they didn’t lose too much money and get to put it on again to resounding sunshine next year.

On the VERY big upside the music was INCREDIBLE.  All the bands were good and in tune (unlike on the TV), even the terrified girl band I saw first of all in a tent.  Standing out particularly were Vanquish who I don’t doubt we’ll see in the Pop scene very soon.  I didn’t get to see all the bands that I really wanted to because with two little kids it was a bit tricky to traipse from the tent to the main stage each time an act finished.  So instead we waited at the main stage and were rewarded by amazing performances from Rozalla and Snap!  I was a fan, but not a big fan of their music in the eighties; I was more of a modern romantic kind of girl.  But live they were incredible!  You could see how great they were by the effect on the kids, because they may have never heard them before but both of them were up and dancing.

They also had some lovely stalls, with no duplicates which was great.  The only thing that I’m not keen on is lots of activities for kids that are what I call ‘easy’ and ‘insubstantial’ fun, that cost money; so we spent a lot of time being nagged for another ride on the bumper cars, or fair ground ride etc etc.  There was a big top with circus performers, but it didn’t quite work for our 6yo because when he went it was all older kids, and he felt left out; you know what a 6yo’s attention span can be like.  But we spent a lot of time chilling out in front of Festival Kidz tent, while I swapped philosophy with the other stall holders, so thank you to Romany for that quiet space.

The food was fab.  The big hairy northern one and I had a curry from Malik’s, which was just gorgeous.  Sadly the kids wanted Pizza which took 40mins, and the noodle people hadn’t made it; understandable that they couldn’t get a full range of food in due to the mud.  We took a little pop up tent just in case which was brilliant, and meant that when it rained heavily the kids could go in it, they ate their pizza in it, and I breastfed Little Dimples in there.

It felt as though there was a slight confusion about the festival.  Was it a ‘family festival’?  Or was it for party goers, as there was a Wedding reception and hen party, plus big groups of young people?  It said in the pamphlet that the aim was to enable kids and adults to enjoy themselves.  But it didn’t quite get the balance right for me.

Maybe that’s because I have a young family, but the camp site didn’t work.  There was meant to be a ‘family’ side and a noisier side.  But it wasn’t marked and it wasn’t policed by the stewards.  On the friday night I went to complain to the circle of tents behind us who had put an awning in between them, but they just thought I was being grumpy and wanting to stop their ‘fun’.  You’d have thought that families with older kids would remember what it’s like to have younger kids, but NO.  So I didn’t sleep at all on friday night, which was horrible, especially as the showers didn’t start until too late at mid-day.  On saturday night I went to ask for help from the stewards, but their response was that the noise had calmed down by 4am the night before.  EXCUSE ME but I have kids who wake up at 5am, you plonker!  Luckily the family of tents had clearly partied themselves out the night before and ironically the group of young guys from ‘Phantom Light‘ I talked to were really sympathetic; so I did get some sleep in the end.

So my verdict is:

Would I go again – Totally

Music – Amazing quality of all bands, incredible energy of headliners!

Mud – not a problem, the kids loved it

Camping – Wasn’t clearly signposted and very noisy.  Top tip: camp right over by a far edge/fence if you go to one this year without different areas.  The good thing is that it was close to the festival site, and parking, so if they are in the same place next year, it’s very convenient.

Poshwash showers – I would have loved to try, but they started up too late on the saturday, and we left on the sunday.

Food – dinner was great (pizza and indian), I didn’t go for the £5 breakfast as it seemed a bit steep, but then saw a £3 option

Social Media – they used Facebook and twitter to keep us up to date, I think this could be done even more and is a great idea

Stuff for kids – pretty good, probably just limited by the mud.  However the mud was an activity in itself!

Contingency planning & Logistics – I’m sure this will be improved next year with more experience.

Determination – I would definitely give them 10/10 for determination for keeping the festival going, well done guys!

Disclosure: I got a family camping ticket in return for reviewing the festival.  Thank you very much to Penn Festival for inviting me, I really hope you invite me back next year so that I can give you 10/10!

I help Mums (and me!) to enjoy being a Mum more and feel happier, healthier and wealthier.

I also help Small Business Owner mums to get their businesses booming, paying for the bills & fun adventures and fitting into their lives easily.

There is something from everyone from ..
* Blog
* Podcast
* Free facebook communities
* My Total Health series books
* Downloadable programs for small Biz owner mums
* Business Club
* 1to1's

I believe that we all deserve to be happy, healthy & wealthy!

Self Love Tips For Mums – Part 1

Us Mums are prone to comparisons, lack of confidence and not taking care of ourselves.…

Scare yourself a little as often as you can

Sanity Check – Do you Actually Want To Run A Business

It’s not that I want to put you off running a business. But I do…