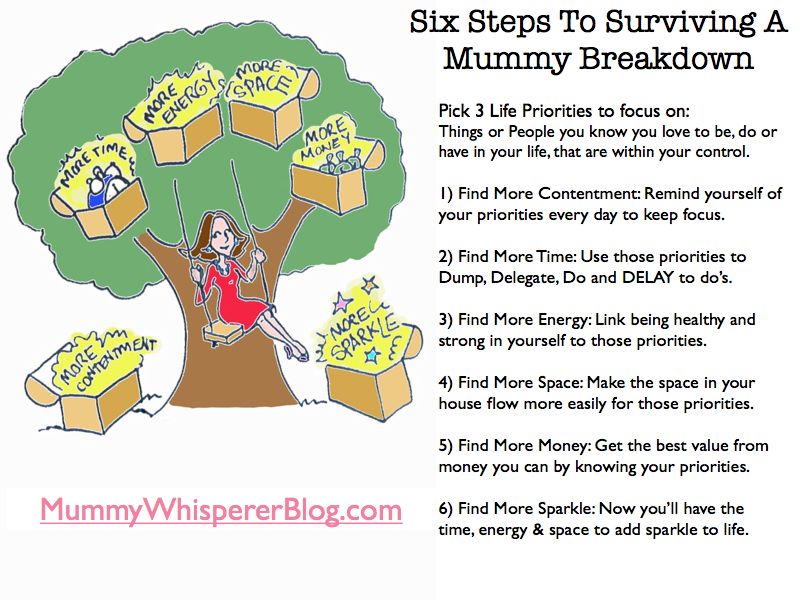 Here are my promised 6 Top Tips for beginning to turn your life around and reduce the stress and overwhelm in your life.

When Nick coffer (My Daddy Cooks) asked me to summarise my book of over 100 pages into 6 simple tips on his radio show it made my brain ache.  But this is what I came up with, because without these steps the others in my book wouldn’t have worked.

In last weeks post on surviving my mental health problems I explained how come I know so much about this and why I know that the MOST important thing is to take care of your basic physical and emotional health.

Other things have helped, but this is the first step.

Life is difficult, but before you try to change everyone else and your circumstances, you can make a massive difference by just looking after yourself.

There’s no ‘one’ immediate click of the fingers answer, but this will help to get you back ‘on the right track’ and reduce the stress and discomfort.  From there you can decide how far you want to change things.

So the steps are:

1) Pick your top 3 life priorities and focus on them, reminding yourself every morning what they are.

2) Use them to sort out your To Do list and save you time.

3) Connect them to looking after you health, nutrition and fitness so that you have more energy.

4) With that energy you can then declutter your house and make it flow or work better for you and the family.

5) And know what the priority for potentially limited funds are.

6) Thereby getting some sparkle and self-love back into your life.

I also know that it’s not always easy to do something, without someone helping you.  So I came up with an idea to help you COMMIT to a change of focus and SHARE IDEAS.

Are you up for it?!  Then come here and commit to getting involved.  It won’t be a big thing you have to do, but it will start to make a big difference.

Remember, don’t ever feel guilty about being stressed, overwhelmed or having some kind of mental health problem.
Don’t let your past affect your future.
There are tonnes of people out there who have also struggled, just check out these amazing lists of blogs from similar mums:
Love all Blogs Grand Mental Health Carnival
Dance without sleeping mental health carnival
Once this idea is off the ground, I’ll do some more blogs on the next steps.  But first things first.
Got a question about it?  Ask me anywhere, Facebook or  twitter

So last night twitterville took off whilst watching Cutting Edge’s program on 8yr old girls going to boarding school.  Now I admit that I’m way too hormonal (No2 is more than imminent, she’s literally seconds away!), so I only managed 5 minutes and had to turn off.  But I chatted to a couple of Mums and thought it through a little afterwards, and regained a more balanced perspective, because there are Pro’s and Con’s to all options.

For one thing ‘Never say never‘;  It does tend to come back to haunt you!

I remember saying that I thought it was pointless to pay for Primary School education, when there was perfectly good state education available, and that I would ‘never’ pay for a 4yr old to go to school!  Ahem – oops!  So what am I about to do, oh yes, you know it, I’m totally about to send my 4-5yr old to a private primary.  Now thats a whole other story, as the the whys and wherefores, which I’m not getting into now.  However, it’s a good example of this very old and wise saying.  Whilst searching through all the local private schools, many of which are part boarding, one headmaster waxed lyrical about their very flexible boarding system.  He looked at all our rather naive and horrified faces, and rather wisely said ‘I know at this moment it is the furthest thing from your mind, however, in another 4yrs time that very well might change!’.  Then in the process of chatting to a mum on twitter last night, I remember actually requesting to become a boarder as a child.  Now I was older than eight, so it would obviously have been less difficult for me.  But still, looking back I can see that if my parents had gone ahead with it, I would have been gained a more stable environment, with much less heavy responsibility.  I wouldn’t change my childhood now for all the tea in china, but I can see how a ‘strong’ parent would make a difficult decision and sacrifice what they might prefer for the sake of a child’s stability and education.  It gave me an interesting and different perspective; after all, we all do things that make our children cry, because we know we have to in order to protect them from something else.  There are those of us who refuse to ever hurt or challenge our children, but does that work?  Nope, it creates spoilt, over-protected monsters, who are dependant and incapable of coping on their own.  So I go back to my rather repetitive advice of balancing support and challenge to your child.  If you find that you do end up boarding your child, then rather than panic with guilt, instead look for proactive ways of ensuring that you are creating a balance elsewhere.

These last couple of weeks have been full of husbands in the media having affairs as well, it’s been quite bizarre how many have been found out: From Tiger Woods, to John Terry, to most shockingly Vernon Kay (sorry mate, skype and texts do count), and potentially Ewan Mcgregor.  Of course, loads of husbands have been saying ‘I would never do that’.  But I warn them to think again (plus read all my blogs about affairs), because if you are naive about the potential for temptation and the predatory nature of some ‘other women’, then you are not going to be prepared for trouble.  There is no doubt that this is what happened to Vernon, who probably trusted himself as much as Tess did, and then when he got into trouble, it just spiralled out of control, partially I suspect because he couldn’t work out how come he had ended up there.

I remember warning one wife, that if she didn’t get her head around her husbands infidelities totally, then within a couple of years, she would find out how come it happens.  Have you ever noticed that?  You find yourself thinking ‘I would never do that, how on earth did they get themselves into such a situation’, to find yourself there within a few short blinks of an eye.  It can be anything from affairs, to drinking/eating unhealthily, to making ridiculous business/financial decisions, to picking the wrong relationships.

This is because of a very ironic rule of life that I was taught by my mentor, which is short and not very poetic, but the ramifications are huge when you really think about it: ‘Whatever you condemn, you breed, attract or become‘.  What it means is that judge someone or something, and you will either end up doing exactly the same thing yourself, or a close person in your life will do it, or your children will.  It’s as though life is trying to teach us the other side of the story, and because we weren’t open to learn about it ourselves, it provides us with the opportunity of experience instead. I’m not even suggesting that this is a ‘punishment’ or ‘karma’ gig; just that it is purely about seeing both sides of the story and gaining more understanding for life.

The other thing about ‘never say never’, is that however shocking it seems, we all have our price.  The price might be massive, and often not financial, but instead an alternative type of price that matches our value systems (our values are what we really love about life); but there will be a price.  Here’s me pregnant with No2, talking about not being available for work for a long time after she is born, and thinking about ways of making sure that she gets as much time with me as No1 did.  But then the phone rings, and someone offers me something that would absolutely catapult my blog, my book, my business, my mission, everything, and so yes, I am totally considering it and looking for ways to achieve it and balance out the potential ramifications.

If there is no price that can push us, there can be pressures.  Many people are terribly shocked the first time that someone who is close to them succumbs to depression, or a break down, or any kind of mental illness.  They wonder how on earth someone could let things get so bad that they would prefer to commit suicide (often considered a ‘selfish’ act).  But I can totally understand how suddenly it can feel as though your life has fallen apart, and your head becomes so full of noise that you can’t think straight.  I can’t imagine how parents can go one step further, either from anger or desperation, to take the lives of their children, but I suspect that it is similar, just magnified.  So next time you hear of someone struggling with mental illness, remember that the official statistics are that 1 in 4 of us will experience some kind of mental illness during our lives.  So rather than judge, you might want to think ‘there but for the grace of God go I’.

So remember, be careful when you find yourself say ‘I’d never do that’, because it might just come back to bite you in the butt!